What can we help you find?

Are you investing in the "Real Thing?"  Or someones piece meal re-worked copy.

From the Experts, Headers 101:

You have probably heard words like: back pressure, scavenging, tuned length, merged collector, rotational firing order, compatible combination and many others that meant something, but how they relate to a header may be a little vague. This article should give you a basic understanding of how a header works, what the terminology means, and how it plays a part in the header's performance gains.

The first misconception that needs to be cleared up is that a header relieves backpressure, but a certain amount of backpressure is needed for optimum performance. Just the opposite is true. A good header not only relieves the backpressure, but goes one step further and creates a vacuum in the system. When the next cylinder's exhaust valve opens, the vacuum in the system pulls the exhaust out of the cylinder. This is what the term "Scavenging" means.

The first consideration is the proper tube diameter. Many people think "Bigger is Better", but this is not the case. The smallest diameter that will flow enough air to handle the engine's c.c. at your desired Red Line R.P.M. should be used. This small diameter will generate the velocity (air speed) needed to "Scavenge" at low R.P.M.s. If too small a diameter is used the engine will pull hard at low R.P.M.s but at some point in the higher R.P.M.s the tube will not be able to flow as much air as the engine is pumping out, and the engine will "sign off" early, not reaching its potential peak R.P.M. This situation would require going one size larger in tube diameter.

The amount of straight in the collector extension can move the engines torque up or down in the R.P.M. range. Longer extension length will pull the torque down into the midrange.

Engines that "Red Line" at 10,000 R.P.M. would only need 2" of straight between the collector and the megaphone. This is just enough length to straighten out the air flow before it enters the megaphone. This creates an orifice action that enhances exhaust velocity.

In the case of V-8 firing order, the
d forth from left to right collector, giving the ideal 180 degree firing cycle. Then it fires two in succession into the left collector, then two in succession into the right collector. If the proper collector outlet diameter is being used (two sizes larger than primaries) the two pulses in succession load up the collector with more air than it can flow. This results in a very strong midrange torque, but causes the engine to "sign off" early, not reaching its potential peek R.P.M. The improper firing order on a V-8 engine results in the need to use large diameter collectors so the engine will perform well at high R.P.M.s. Unfortunately the large diameter collectors cause a tremendous drop in air velocity, resulting in less scavenging through the entire R.P.M. range.

Often cams are used with extended valve timing to help the exhaust cycling. This results in valve timing overlap (Intake and Exhaust valves both open at T.D.C.) which causes a "Reversion"cycle in the exhaust. When this happens, exhaust actually backs up into the cylinder causing intake air to be pushed back out the intake. This reversion causes "Standoff" (fuel blowing out of the Intake) at low R.P.M.s. This whole improper cycling has resulted in a number of "Cure Alls" to help stop this reversion and standoff.

The plentum intake was created to stop the fuel "Standoff". Then came "Anti Reversionary" Cones in the exhaust tubes, and stepped tube diameter in the header, extended collector lengths and even plentums in the exhaust tubes. In this chain of events beginning with improper firing order, a series of cures has developed, each one causing a new problem.

The optimum cure to this whole problem is to correct the exhaust firing cycle. The two cylinders that fire in succession into each collector have to be separated. This can be done partially by a "Tri-Y" header, where the four primary tubes from each bank merge into two secondary tubes (separating the two pulses firing in succession) and finally collect into a single collector. This type of header helps, but the two pulses are still coming back together at the collector.

The second optimum cure is to cross the two center tubes from each bank, across the engine running them into the collector on the opposite side. This makes the firing cycle in each collector 180 degrees apart, the same as a four cylinder engine. Once this firing order is achieved, the small collector outlet diameter can be used and the "High Velocity Scavenging" at low R.P.M.s cures the reversion problems and eliminates the need for extreme cam duration.

This sounds so easy, you are probably asking why wasn't this done from the start?

If you have ever seen a set of 180 degree headers you would understand.

On today's cars, with space virtually nonexistent, crossing four tubes either under the oil pan or around the front or rear of the engine presents major problems. On racing applications where it is possible, there is still the problem of keeping the tube length down to a reasonable 32" long. If that's not enough challenge, then try to arrange the tubes into each collector so they fire in a "Rotational Firing" pattern. Then you have, what has been called "A Bundle of Snakes".

Arranging the tubes to fire rotationally adds to the scavenging capabilities. The exhaust gas exiting one tube, passing across the opening of the tube directly beside it, creates more suction on that tube than it would on a tube on the opposite side of the collector.

The next problem is "Turbulence" in the collector. When four round tubes are grouped together in a square pattern, so a collector can be attached, you notice a gapping hole in the center of the four tubes. The standard method in manufacturing headers is to cap this hole off with a square plate. This plate in the center
of the four tubes creates dead air space, or turbulence, disrupting the high velocity in the collector. This problem is solved by using a "Merge Collector". This collector is formed from four tubes, cut at approximately an 8 degree angle on two sides. When the tubes are all fitted together they form a collector with a "Pyramid" in the center. This has eliminated the need for the square plate and has taken up some of the volume inside the collector, speeding up the air velocity.

Other methods of curing this problem are: fabricating a pyramid out of sheet metal and welding it over the hole between the tubes, or squaring the tubes on two sides so they fit together forming a "+" weld in the center eliminating the hole all together.

You can see that there are a great many factors that go into making a good header. When the header, intake system, and cam timing are all designed to operate to their maximum in the same R.P.M. range, then you have a "Compatible Combination". This combination can be tuned to deliver maximum power at any desired R.P.M. range.

These are some of the "Basics" you need to know about building a good high performance header. There are many other adjustments that can be made to fine tune a custom header, but this should give you a basic understanding of how all the components work together. 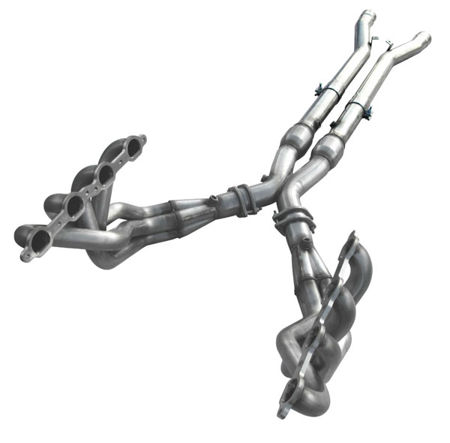 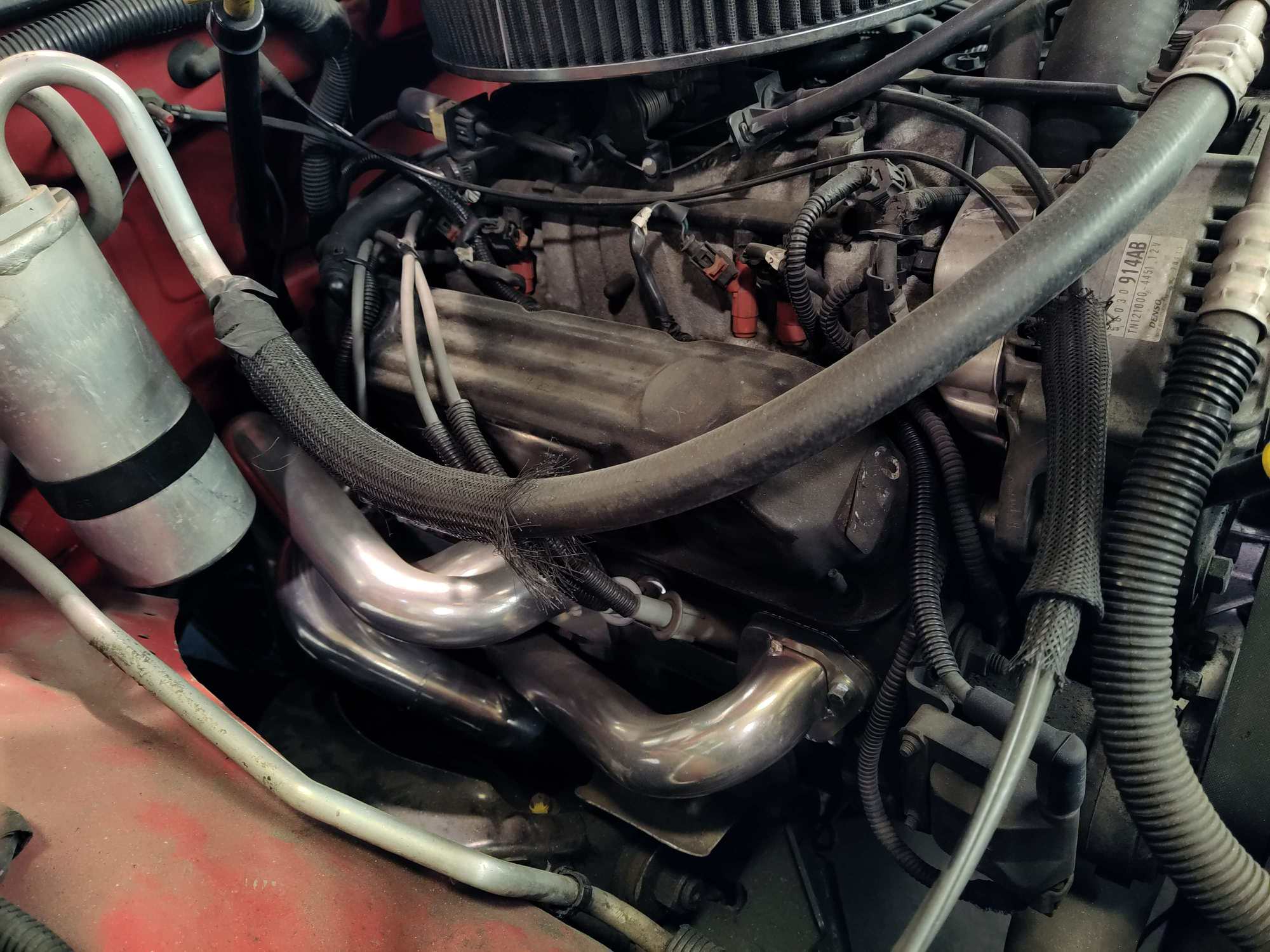 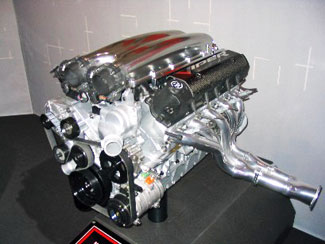